The wine cellar at Benny’s Chop House is immediately behind the bar. It’s tall and narrow. Just wide enough for two people to pass each other if they’re really close friends. We’ve scooted all the way back, past the working end of the bar’s soda machine that hisses and scares the daylights out of everybody.  We’re under the watchful gaze of 10,000 bottles of wine lodged safely from floor to ceiling. Each neck sports a tag with the house code on it and maybe the wildly technological application of a blue highlighter indicating there’s more of whatever wine stacked in the cabinets along the floor. We just finished passing wines across ourselves to the wine steward because even during our tour they’re busy. We’re in the eight thousands, at the back end, next to the luxurious casket for a bottle of Louis the 16th Brandy, the empty bottle inside still worth more than my car and we’re all marveling because Benny’s Wine Director, Mark Maruszak, is cradling a bottle of Château d’Yquem, 1945, that’s worth about nineteen grand. 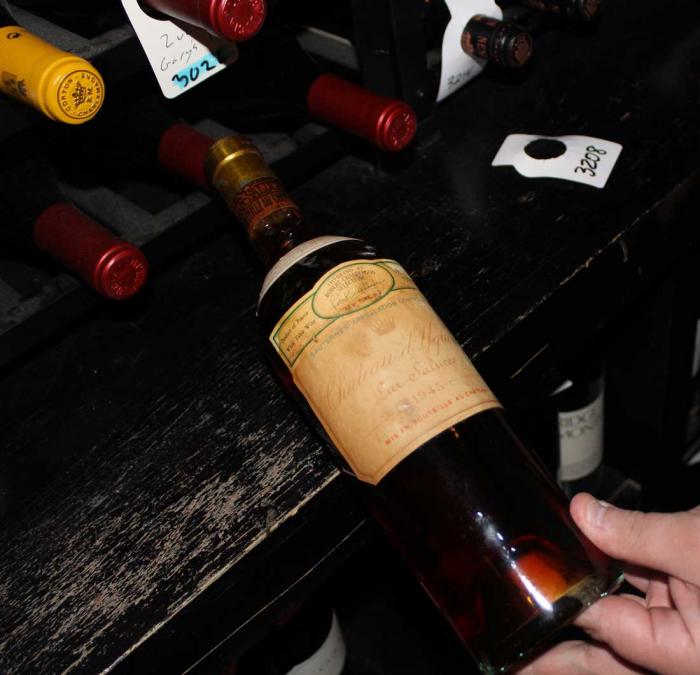 How much a wine costs is not necessarily an indication that it will be worth the money. The idea that you can get a decent wine for less than an Uber ride to Wrigley is widely accepted. And true. There are extraordinary, affordable wines everywhere – I’ve written about them. The punk sensibility driving the creation and promotion of these new ‘garage’ wines is gaining a lot of ground and changing the makeup of many cellars in Chicago. But not at Benny’s. You’re not going to find an amphora-aged sour orange-colored wine on the list and Maruszak isn’t going to recommend one (unless you say, like, hey Mark, what I really want is a flavor profile like an old Fanta). What you will find are solid, respected, old-world bottles in the next tier – and higher. What you will find is classic wines and their newer counterparts, wines made from the same grapes, that are finding a growing audience not for their upstart methods but for their adherence to the deep tradition of old-world winemaking.

Maruszak is a level two sommelier, from the court of masters and level four from WSET. He’s been working wine for nearly a decade. He’s kind of a big deal and I don’t know if this has come across yet but the man knows his grape. At a recent dinner, Maruszak paired two wines with each dish: an old-world classic with its new-world cousin. Each wine made from the same grape; each wine representing a different vertical; each wine’s profile wildly divergent from its match in the other glass.

Delicious tuna poke, just wonderful but I’m not a food reviewer and we’re here to talk about wine. Maruszak set two glasses on the table:

On the left, a classic champagne: Pol Roger’s Extra Cuvée Brut. It was everything you love about champagne, beautiful and straw colored with just the merest indication of slate when you dip your nose into the glass. It tasted like a celebration and made my hand rise into the air like it had its own brain and suddenly I was toasting everyone at the table. That’s after one sip.

On the right, the Pascual Torso, an Argentinian bubbly made from Chardonnay grapes. Where the Roger was clean and crisp, the Torso is buttery and sweet, with just a distant memory of green apples and toast. It felt younger, a little conceited. It didn’t make me want to toast, it made me want to buy a motorcycle and drive across Patagonia and write bad poetry.

I’m not here to talk about food but this raviolo, heavenly. The saffron is in the pasta, which is thin as tissue, wrapped around a generous knob of lobster and crab, coated in brown butter with lemon, dill, and capers and I asked it to marry me. I proposed to pasta.

On the left: It may have had something to do with the extraordinary pairing of New Zealand’s Babich with the seafood. You can only get the black label blanc in restaurants, though I have been assured its retail counterpart is just as good. Babich practically engineered this wine to pair with food, especially shellfish. Its aroma explodes out of the glass, without any of the softening delivered by oak aging (it’s aged in stainless steel) the bright, aromatic spirit of the grapes are right there. It is a bold white, with intense flavors that cut through the fatty profile of a seafood pasta. An absolutely brilliant pairing.

On the right: Yet . . . the Cliff Lede, an oak-barreled Napa Valley sauvignon blanc is an equally perfect accompaniment to the lobster and crab in every way, even though its flavor could not be more conservative when compared to the New Zealand bottle. The Cliff Lede tastes like California. It has the same citrus notes as the Babich but they’re chilling out because they took a nap in an oak barrel. It’s luxurious and classy.

The steak sliders are USDA prime, tossed with caramelized onions and horseradish cream, served with truffle fries and they are delicious and I want all of them. But the wine . . .

On the left: Château Peyrabon Cru Bourgeois, which smelled like someone had set fire to a leather box of black cherries in an old French library. A voluptuous red. A strong old man of a red. It has all the benchmarks of an excellent Bordeaux, as it should since the vineyard’s been making it since 1890. I’ve heard the 2005 Bordeaux growing season was the kind of once in a lifetime vintage that brings wine lovers to joyous tears. This affordable, brilliant example proves that to be true.

On the right: Turnbull Cabernet Sauvignon; it smells like you’re about to drink a steak. It tastes like a tobacco pouch filled with chocolate covered strawberries. It defines the Cabernet Sauvignon grape, one of the major grapes in a Bordeaux blend which is why Maruszak is serving it next to the Château Peyrabon, which makes it sound like I know what I’m talking about but I don’t.

Look at my wine descriptors: a library? A tobacco pouch? Steak? But Maruszak assured me one doesn’t have to be a sommelier to understand the complex flavors of a great red wine. I can’t tell you what a tannin structure is, but I can tell you when a red is smacktacularly good and makes me kind of want to chew it and that’s sort of the same thing. And as it turns out (those of you who know anything about wine please skip ahead as I am about to reveal my own newbish zeal) old library books and some wines share volatile chemical compounds. I have had several wines which immediately made me think of a delicious, fresh, raw steak covered in cracked pepper but I just assumed I was hungrallucinating. Maruszak agrees with my assertion that there’s a meaty quality to the Napa Valley cab and makes me suspect I might not be experiencing a brief respite from sanity.

Still, though the wines listed above are both approachable and affordable – hovering between 30 and 60 bucks a bottle – there are pricier labels in that narrow passage behind the bar. Besides the brand-new-car-priced World War Two vintage from above, Benny’s carries wines in the well-maintained-used-Beemer range of 4 to 8 thousand dollars just in case your new album charts.

Benny’s Chop House is one of the four or five Chicago steak houses where successful CEOs and ex-presidents have dinner. Indeed, ours is very politely interrupted when a Silicon Valley VC drops by to shake hands with Maruszak and ask him to handle a table of eight with no reservation – which of course, Maruszak makes it happen even though it’s a Thursday night at 7:45 and the place is wall-to-wall Brooks Brothers and Louis Vuitton. You don’t go to Benny’s to watch the Cubs lose a marginal game. You come to Benny’s because you play third base and they won.

The Smores chocolate cheesecake has an in-house marshmallow and a chocolate graham cracker crumble and egads, the port. And Holy Toledo, the tawny. Drinking port is like listening to a classic pop song played by an elderly New Orleans jazz band. It’s just better. They make the song sound authentic, from another age, and you start thinking to yourself: Wait a minute, did Drake steal “In My Feelings” from Miles Davis? (No). Port does that to wine, fortifying it with brandy until it tastes like you’re drinking an old sepia photograph of plum pudding sitting in a wingback, reading a . . . ok, I’m doing it again. What I mean is the port is splendid and marvelous good enough to render me temporarily sans metaphors and you should have some.