Rock Out with the Rock of Ages!

Broadway In Chicago rolled into town with the Tenth Anniversary tour of Rock of Ages, and what a glorious heap of fun this rock musical is! Now open for a limited one-week engagement at James M. Nederlander Theatre, the riotous party rolls through April 28, 2019. And trust me, you don’t want to miss it.

It’s 1987 on Hollywood’s Sunset Strip when a small-town girl meets a big city rocker. As they fall in love in L.A.’s most famous rock club, Rock of Ages allows fans to rock out once again to their favorite ‘80s hits. Featuring the music of iconic bands such as Styx, Poison, Twisted Sister, and Whitesnake among many others, this Tenth Anniversary production features a dynamic new cast revisiting the larger than life characters and exhilarating story that turned Rock of Ages into a global phenomenon. 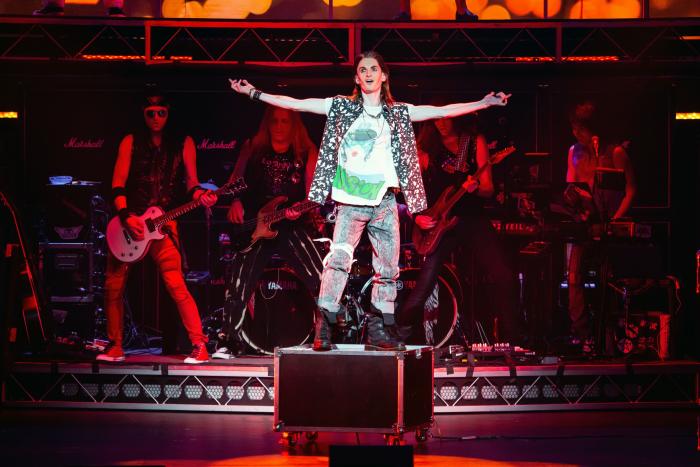 Part Spinal Tap, part Grease, part Headbanger’s Ball, Rock of Ages is fantastic fun. It is impossible to leave the theatre in a bad mood. Honestly, as I took my exit, my face hurt from smiling and my palms burned from clapping along. Is it campy? You betcha. Is it raunchy in parts? Why, yes. Yes, it is. But as the sum of its parts, Rock of Ages is a pure, unadulterated delight for those of us who came of age in the 80s. And it appeals even more so to those of us who secretly harbor an affinity for hair bands. Guilty as charged…

Rock of Ages opened April 7, 2009 on Broadway and played more than 2,300 performances, earning five Tony Award nominations including Best Musical. The show also enjoyed successful national and international tours and, in 2012, was turned into a major motion picture. With a book by Chris D’Arienzo and arrangements and orchestrations by Ethan Popp, the tenth anniversary tour is being directed by Martha Banta and choreographed by Janet Rothermel.

The show’s entertainment value cannot be underestimated. Belting out rock & roll’s greatest hits, the cast transports the viewer to a different era. There is honesty and earnestness about the story, however improbable. There is nostalgia for the grit and brawn of old Los Angeles, the one hidden underneath all the glitz and glamour. Accompanied by an excellent live band, the cast harkens back to the jean jacket/leather mini/big hair kind of time. Remember when a great band was all you needed to be happy? I certainly did, as my youth came rushing back through the sights and sounds.

Let your inner rocker loose and go see Rock of Ages. You will be glad you did.

James M. Nederlander Theatre is located in the heart of Chicago’s Theatre Row at 24 W. Randolph Street. Rock of Ages is now playing.