Less than an hour from Chicago is a global treasure, an ecosystem that’s rarer than the rain forest and nearly as diverse. It’s home to hundreds of species of birds and plants, and bison now roam in a land from which they’d disappeared. And you own it.

Midewin National Tallgrass Prairie is the largest open space in the Chicago area and the largest tallgrass prairie restoration site in the country. Located south of Joliet in Wilmington, Illinois, it encompasses 20,000 acres with over 13,000 acres open to the public. Pronounced mid-DAY-win, the name is a Potawatomi word that means Grand Medicine Society. It’s meant to honor the original inhabitants of the land as well as the lessons that can be learned from understanding a complex and unique ecosystem.

What had previously been the site of farms and explosives manufacturing and storage is now undergoing a massive restoration project to bring it back to its natural state, before agriculture, progress, and war decimated its unique ecology. It’s a combined effort from the U.S. National Forest Service, the National Forest Foundation, The Nature Conservancy, and several local and regional stakeholders.

Midewin’s change from its former glory began when the settlers spread west in the 1800s and gradually converted the land to farms. Before the settlers there were 170 million acres of tallgrass prairies. Within a generation the majority had been plowed under. Agricultural drainage tiles were installed, as they were over most of the Midwestern farmland, manipulating the aquaculture of the region and allowing for the rich production of produce that has helped the Midwest feed the world. If you see a corn field or a soybean field in the Midwest states there’s a good chance that buried underneath are these tiles. While great for farming and producing food, they can wreak havoc on an environment.

The biggest environmental damage, though, came in 1940 when the U.S. Army purchased several of the small farms and built the Kankakee and Elwood Ordnance Plants. These were consolidated in 1945 to become the Joliet Arsenal, an essential player in the World War II war effort. At its height, this facility employed more than 10,000 people and produced more than one BILLION pounds of TNT, stored in nearly four hundred bunkers throughout the property.

In the 1970s the Joliet Arsenal was decommissioned. Over the next two decades much of the toxic contamination that was a result of those war efforts was remediated, and in 1996 the land was handed over to the U.S. Forest Service, bunkers and all.

Restoration efforts began and by 2004 the first 5,000 acres were opened to the public. In 2010 the National Forest Foundation joined the party and brought in local and regional partners to help with the effort. With thirty square miles and two centuries of environmental havoc, nothing of this scale has ever been attempted. Gone will be all but a few of those concrete bunkers, They’re removing almost two hundred miles of roads and railbed. Invasive species have to be replaced with native flora, which will encourage the return and growth of native fauna. It’s an incredibly challenging feat as well as an expensive endeavor. Fortunately, the site has been awarded multiple million dollar-plus grants with matching funds provided by area businesses like Grand Victoria, and volunteers donate 10,000 and 15,000 hours of their own time each year.

The region is being rewarded in turn with a massive recreational area. One of the biggest draws of Midewin is the return of bison. With their hooves and their grazing habits, which carry them farther afield than the relatively stationary domestic cattle, the bison are considered natural stewards of the tallgrass prairie. Twenty-seven were introduced to Midewin last year, and this year eleven bison calves were born. They freely roam over their own patch of 1,200 acres, and the public are invited to try to catch a glimpse of them (from a safe distance, of course!).

There’s more than just the bison, though. This expanse of tallgrass prairie is bringing back threatened species like the native Royal Catchfly flower and Henslow’s Sparrows, considered a “Species of Concern” by the U.S. Fish and Wildlife Service. From weevils to eagles, Midewin provides an environment of interconnected wildlife whose impact will take years to discover.

The bison are one of the main draws at Midewin, but they’re not the only reason the public is taking advantage of this beautiful resource along historic Route 66. There are thirty-four miles of trails on the property, twenty-two of which are for hiking only, and the remaining twelve also available for biking and equestrian use. By connecting with the regional bicycle trail network the reserve is easy to access from two wheels as well as four. Those 13,000+ acres are free to roam on foot for everyone. 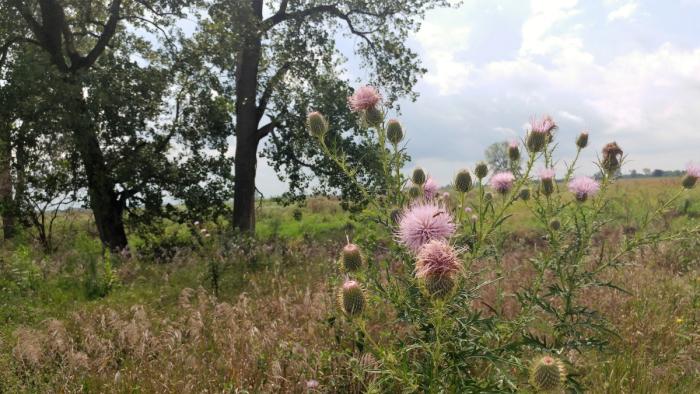 Before there were farms and skyscrapers, highways and subdivisions, the area now known as Illinois was a vast prairie filled with undulating tallgrasses and roaming herds of bison. Midewin National Tallgrass Prairie is bringing the prairie back to the Prairie State, for everyone to experience, learn from, and enjoy.