Olives. As a dedicated foodie, I must admit to a passion for olives in every form. Until I started studying up on them, however, I had no clue that they could be a polarizing food. Apparently, many people (including some of my favorite foodie friends) have an aversion to them. If those people had joined me on May 8 for “Have an Olive Day,” I think they might have had a change of heart.

Part of a nationwide initiative celebrating European table olives, Olives from Spain, the Inter-Professional Table Olive Organization, with the European Union brought the “Have an Olive Day” campaign to the city of Chicago with world-renowned ambassador Chef José Andrés. Showcasing the wide variety of European table olives, the history of the products, and the infinite ways to enjoy them, Chef José Andrés spread appreciation and knowledge in a menu with exclusive recipes with European olives. His focus was to prove just how special olives are, and how easy – and tasty – it is to incorporate olives into a daily lifestyle.

Chef José Andrés is the perfect choice to champion the cause of olives. He clearly has a passion for his work, but particularly for the olives of his native Spain. In his own words, “Given Chicago’s inspiring enthusiasm for food, and the exciting position the city holds as one of our nation’s finest culinary headquarters, it’s only natural that our next campaign stop would be Chicago. European olives are in my blood, and I embrace the opportunity to educate U.S. consumers on their versatility and history.”

He is not only a superstar chef, but a superstar humanitarian. He has worked tirelessly in both Haiti and Puerto Rico (#ChefsForPuertoRico) to help feed and nurture people in the wake of last year’s hurricane disasters. He was named this year’s Humanitarian of the Year by the James Beard Foundation. Along with running numerous restaurants around the world, assisting in Puerto Rico and Haiti, he also has the tireless energy to be the brand ambassador for “Have an Olive Day.”

During the “Have an Olive Day” event, we sampled some delicious olive-centric creations. The standout was the paella made with fresh spring vegetables along with Manzanilla olives stuffed with pimento. Other fantastic creations included Hamachi Crudo served on seaweed with olive tapenade and a spectacular (and intriguing) dessert – white chocolate lollipops scattered with Hojiblanca olives (savory black olives from Spain). Chicago was chosen as one of the major cities on this tour because we consume a tremendous quantity of olives here. Who knew that Chicago was so addicted to olives?

Here are a few intriguing facts about olives: 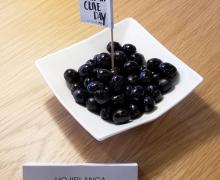 There are numerous types of olives classified by the level of ripening when harvested. Each level can be easily characterized by an olive’s outer color:

The ‘Have an Olive Day’ campaign will run through 2019, making stops in various cities across the U.S. with heavy olive consumption including New York City, Miami, Los Angeles, San Francisco, Philadelphia, and Chicago.