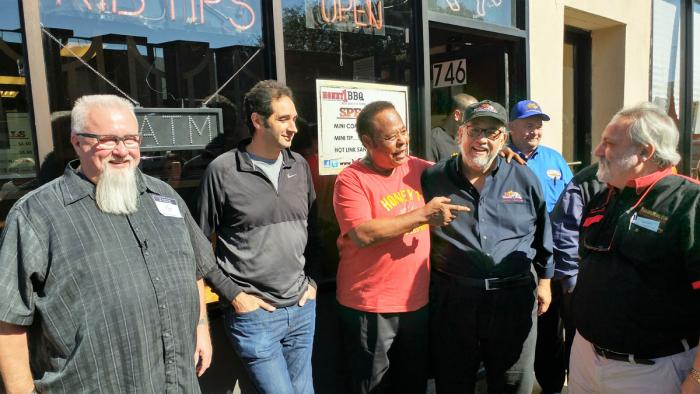 That brilliant advice was just one of the words of wisdom shared by Chicago barbecue legends during the recent Great Chicago BBQ Tour. I’m not sure who said it, because by that point I was punch-drunk on rib tips and hot links. I think it was Barry Sorkin from Smoque BBQ, but it could have been Barn & Company’s Gary Wiviott, or Meathead Goldwyn, or even Dr. BBQ, Ray Lampe.

These giants of ‘que, along with Sweet Baby Ray’s Dave Raymond, were invited by Famous Dave Anderson to tour some of Chicago’s legendary barbecue joints. I was lucky enough to hop on the “Dave Force 1” and get a taste of real Windy City smoked meats and learn more about this most American of cooking styles.

We started off by visiting Honey 1 BBQ, 746 E 43rd, where pitmaster Robert Adams swears by his aquarium smoker. This rectangular contraption allows him to build a wood-burning fire indoors and it directs the smoke out through a chimney flue. It features tempered glass windows so he can see inside, making it look like an aquarium. It replicates the flavor of Southern pit cooking and is mainly found on the South Side of Chicago.

You won’t see a lot of aquarium smokers around, and most of the ones you do see are used for keeping the meat warm after it’s been cooked with another method. That’s a shame, because those spots just won’t get the wood-smoked flavor you get from cooking in an aquarium.

The reason they aren’t used for cooking as much is because they require an experienced and patient pitmaster. Adams has a stool by his smoker and he sits there most of the day, tending the fire. When asked what kind of thermometer he uses to make sure it was the right temperature, he replied with shock that someone would even ask that question, “I AM the thermometer!” When asked how he knows they’re done? “I just look at them.”

The proof is in the rib tips. As Ed Levine of Serious Eats said, they’re “tender, saucy, and meaty, with just enough fat to soften the chew.” The piquant, slightly spicy sauce is a perfect accompaniment, and even better when sopped up with a slice of white bread.

On our way to the next stop we learned more about the men who’ve made feeding people smoked meats their mission. Sorkin actually wrote a mission statement before opening Smoque, and it so resonated with barbecue fans that when he opened there was a line out the door.

“What resonated,” he said, “was absolute passion – thoughtful passion.”

There’s no shortage of passion with these experts. Wiviott, who’s the author of Low & Slow: Master the Art of Barbecue in 5 Easy Lessons as well as the pitmaster at Barn & Co., began his love affair when his wife gave him a smoker 28 years ago.

“My wife gave me a smoker, and I always do what my wife says.”

Sorkin hated his job, but he loved cooking in his backyard. Famous Dave remembered his dad pulling ribs wrapped in newspaper out of his lunch box. “I knew as soon as I tasted those ribs I was going to learn how to make them.” Famous Dave’s serves their All-American Feast on a garbage can lid as an homage to how barbecue was cooked long ago – in garbage cans.

This sense of family and tradition fuels barbecue more than any wood or charcoal. Kameron Lemons, 28, shared why he was working at Lem’s Bar-B-Q, 311 E 75th St., the place his grandfather began in 1954. He said he loved it when his grandfather would wake him up at six or seven in the morning and take him to work with him, but then he went to college and after graduation began working for another company. After awhile he decided that was not the right path for him.

“Why would I work for someone else when I can come back and work for family,” he said. When you work for family “you help your family grow, you build your own treasure.”

And what a treasure Lem’s is. Their ribs, with their charred edges and pink, juicy inside topped with a thin sauce, are so good I would drive from Elgin to 73rd just for a taste. I exclaimed as much as soon as I took my first bite, and repeated it several times (to the annoyance of anyone was around me, I’m sure). I have a picture, but it doesn’t do it justice so you’ll just have to use your imagination. Or (better idea) go to Lem’s and try for yourself.

Barbecue – good barbecue – inspires that kind of passion. The legends we toured with were down-to-earth and you could tell they were just having fun. Sorkin said it was “like being on a bus with the Stones.” These gents love ‘que, and they love cooking, and they love sharing. When I told Meathead that I made his Italian beef recipe and loved it, he beamed.

Meathead is the man behind AmazingRibs.com and the author of the bestselling cookbook, Meathead: The Science of Great Barbecue and Grilling. His book is recommended by Chicago chefs like Paul Virant, Rick Gresh, and Charlie McKenna, but a simple compliment from a stranger made him smile like I’d just given him the last plate of hot links.

The Great Chicago BBQ Tour was an insight into Chicago-style barbecue and the people who have made, and who make, it great. Get your wet naps and your appetite and head towards the smoke, ’cause where there’s smoke, you just might find some of the best barbecue around.