If there’s one theater that says Chicago, it is, quite literally, The Chicago Theatre.

If there’s one theater that says Chicago, it is, quite literally, The Chicago Theatre. Its six-story marquee is a classic symbol of the Windy City, but at one point it wasn’t so glorious.

From Riches To Rags

Like many of Chicago’s prominent landmarks, The Chicago Theatre was built in the 1920’s. It was originally a movie theater and was the flagship for Balaban and Katz Theatre Corporation, which operated over a hundred theaters in the Midwest. Over 50 of those were in the Chicago area.

If it seems similar to the Uptown and the Riviera, it’s because it was designed by the same architects, Cornelius W. Rapp and George L. Rapp. The Chicago Theatre was the first built in what was to become their signature Neo-Baroque French-revival style.

The theater opened to a sold-out house on October 21, 1921. The film “The Sign On The Door” starring Norma Talmadge was accompanied by a 50-piece orchestra and a 29-rank Wurlitzer organ. That organ is in the theater to this day.

In the 1970’s the theater switched entirely to film, and by the mid-80’s it was closed, despite being added to the National Register of Historic Places in 1979.

From Rags To Riches

Fortunately The Chicago Theatre Preservation Group had purchased the theater and its neighboring Page Brothers Building. They were both renovated, and the theater reopened in 1986 with a performance by none other than Frank Sinatra.

Since then the theater has continued to attract world renowned performers and to sell out shows.

A Work Of Art

During the restoration, The Chicago Theatre was returned to its 1930’s glory. The auditorium features murals along the ceiling, as well as elaborate chandeliers and gilding. The grand staircase is reminiscent of the Paris Opera House.

Also reminiscent of Paris is the arch above the State Street marquee. It’s a miniature replica of the Arc de Triomphe and within is a stained-glass panel that features two horses holding 35-mm in their mouths, which is the coat-of-arms of Balaban and Katz. 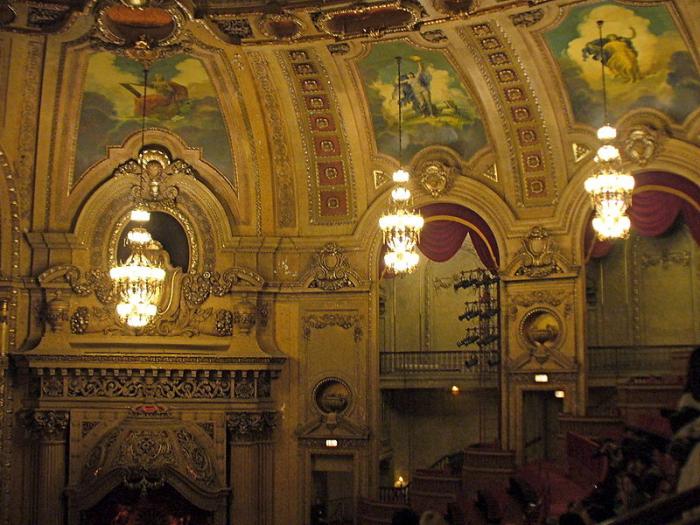 If you’d really like to see behind the scenes take The Chicago Theatre Marquee Tour.  Not only will you get the story behind the grand lobby, the staircase, and the auditorium, you’ll also go backstage.

It’s a tradition for performers to autograph the walls and the staircases. They range from simple signatures to elaborate sketches and paintings. See if you can find Frank Sinatra’s, Dean Martin’s, or Bob Hope’s. (You can’t miss Prince’s mark.) Perhaps the most exciting part of the tour is when you actually step on the stage itself.

Of course, the best part of visiting The Chicago Theatre is seeing the live performances. Despite facing an uncertain future at one point, this majestic theater rebounded and is back to bringing the best performers to its historic stage.